The basis of every computer is its Operating System. Without an operating system, a computer is just like a body without nerves in it- It won’t be able to perform any function. There are many Operating systems in the market such as UNIX, Linux, Windows, and the latest of them all macOS. Therefore, in this article, we are discussing the major pros and cons of ubuntu 2022 in detail.

What Do You Mean By Ubuntu Operating System?

Ubuntu is a kind of Open-source operating system, distributed by Linux. It was initially released in 2004 by Canonical in three editions- Desktop, Server, and Core. Ubuntu came into the picture for devices that are related to the Internet of Things.

This operating system has all the features that were found in Unix OS, and in addition also has a Graphical User Interface, that can be customized according to user needs. It is important to know the basic Ubuntu pros and cons 2022 for many of your developers.

In the beginning, it was meant for usage on personal computers, but later, a server edition of the same was also released.

What Are The Benefits Of Ubuntu System?

Ubuntu provides its users with many software packages, which allow them to copy, change, develop or redistribute their own version of the program by changing the codes of the software.

It comes with a wide range of software programs like Firefox, LibreOffice, Thunderbird, etc., and some small-sized games such as Sudoku, chess, etc. Cloud computing and OpenStack are supported by Ubuntu, and its default desktop is GNOME (GNU Network Object Model Environment). 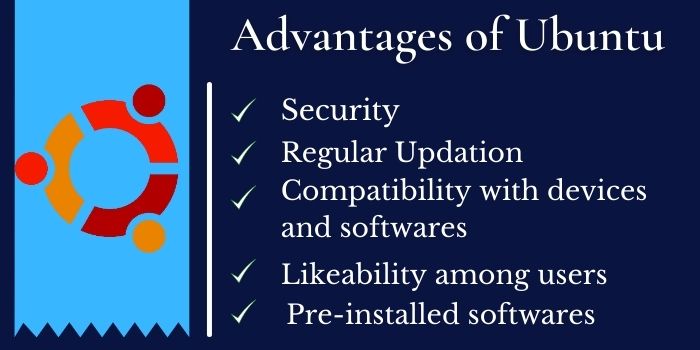 The main advantage of ubuntu is the security provisions that are much better if we compare it with other Operating systems like Windows and OS X. Especially when we talk about Windows, its biggest flaw is that it is easily infested by a lot of viruses, worms, and Trojans, which ultimately deteriorate it’s working.

Also, the information present on the system is compromised by the effect of these viruses, and even anti-viruses have loopholes in finding and eroding them away. In this case, Ubuntu is free of such kinds of fears pertaining to an infestation of viruses or erosion of data, making it a more secure type of software.

Every year, twice, Ubuntu upgrades itself. One of its versions is released in April and the other in October. With the updates come some additional features or built-in software. The applications and themes, backgrounds, fonts, etc. are improved. Bugs are fixed and the working and efficiency of the software are also enhanced. Thus, the evolution of Ubuntu has been quite impressive in the last few years.

Ubuntu is compatible with a lot of devices and software. The applications that we can use in Windows are also compatible with Ubuntu, and thus people who are used to working with Windows cannot find many differences.

This can also be the main reason why we are putting the pros and cons of ubuntu. Out of all the software distributed by Linux to date, Ubuntu has become most popular, and its likeability among users is high. The creativity that was utilized in its making, and is still showed with its updates makes it popular amongst the users. The support provided on its forums is also satisfactory, and its regular updates keep on improving its performance.

All the software that a person might need to meet its basic requirements come pre-installed in Ubuntu. There are music players, photo and video editing software, Office suites, etc. in-built in Ubuntu, unlike Windows, where you have to download most of them.

Most of the computers or devices made today are made keeping in mind compatibility with Windows Operating System. This creates a problem for users who want to install Ubuntu- they have to check whether Ubuntu is supported by their hardware or not. For e.g., Dell laptops and computers do not generally support Ubuntu. Therefore, in terms of hardware support, Ubuntu lacks far behind Windows. This is the major disadvantage of Ubuntu experience by many developers.

There is this issue with Ubuntu that it is unable to play MP3 files. If you want to listen to music, you would have to first convert your files into some other format that is supported by Ubuntu.

Ubuntu is not an appropriate operating system for gamers. Most of the games released are not supported by Ubuntu, and even if they are supported, their graphics are not as good as that of Windows.

Therefore, we can say that a person who likes to try something new, can totally go for Ubuntu. But in order to do so, he would also have to compromise on some features like graphics, some software, and mp3 files. If you want comfort and are well versed with Windows, using Ubuntu might not come in handy to you. So take advantage of this detailed guide of the pros and cons of ubuntu while considering this as your operating system.

13 Benefits Of Using A Graph Maker For Your Finances

Role of Note-Making in Achieving a Good Score

How to learn fast and better: tips for students