Apple has ticked all the right boxes with the New Apple Macbook Pro 16" laptop. It has taken bold step to adopt a gorgeous 16" screen equipped it with a powerful processor. Brought the Magic Keyboard back. It was more than what Apple Macbook Lovers could ask for!

Apple Macbooks are one of the most popular lines of laptops to have embraced our planet from the stables of Apple. Many users both apple and non-apple have voiced their concern for Apple’s lack of innovation in their product line ups.

The same was said of Macbook’s both Macbook pro and Macbook air. The previous versions of Apple’s Macbook series were nothing more than minor updates, to be honest. Is the status quo going to change with their Mac Book Pro 16” 2019 model, Lets dive straight into a short and crisp review?

New 16” Screen Size: A shift from the existing trend

Let’s start our review with the most important aspect – Screen Size. I would say this is a really bold decision by Apple. Traditionally they have released Macbook Pro’s in two screen sizes 13” and 15”. This year they went ahead with 16” screen size – which I believe is really a welcome change.

It also shows that Apple is finally shifting from the approach that it has taken in past few years. The same new thought pattern can be seen with the release of their New Apple iPhone SE. 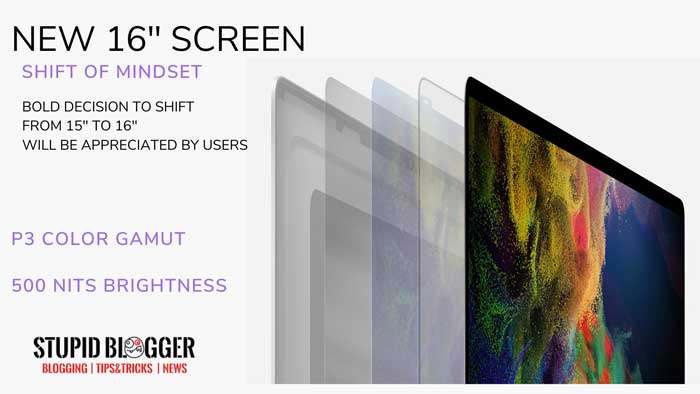 The 16”  Apple Macbook Pro comes equipped with a massive retina display. It looks really big, bold and beautiful and that extra inch gives it a life of its own. This will be really appreciated by people in the creative fields such as Photography, Film Making, and Graphic Designing etc to name a few.

At 500 nits it is super bright. P3 wide color Gamut ensures that you get the best and accurate colour representation on the screen. Apple screens are sort of considered standard to measure accurate color representation in the industry and this screen truly lives up to that standard.

The big screen in fact make the picture/video looks much better. Both screen resolution and PPI have been ramped up compared to the previous Macbook Pro 15” Model. The screen resolution now stands at 3,072 x 1920 and 226 PPI – Almost Ultra HD specs.

One of the things that Apple have been criticized a lot is making the base Macbook Models equipped with low ram/storage. And this is kind of true. Generally, If you want to go for a better spec Macbook then be ready to shell out a few hundreds of dollars more (This has been the general trend in Apple Pricing). While the top-end model comes with 64GB of ram and 8TD of superfast SSD storage.

The New Apple 16” Macbook pro base model comes with 512GB of SSD storage and 16GB of ram. That’s not bad actually. I wonder 1TB of SSD in the base model would have been great but 512 GB is not a disappointment, I admit.  The ram is DDR4 with a clock speed of 2666MHz. The New 16” Macbook Pro comes with the intel’s new i9 chip. 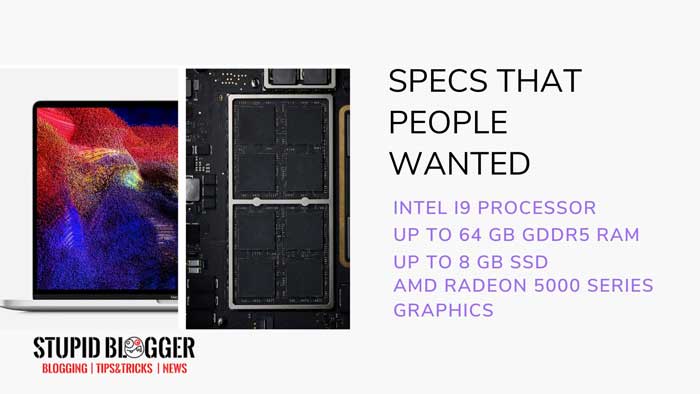 These kinds of specs in a MacBook shall be a dream for any Macbook lovers and seems like dreams have come true this time. Apple’s strong point lies in the industry’s most efficient hardware and software optimization in the form of iOS. This should be great for smoothly running video editing, Corel, cad, photoshop, and other power-hungry software.

The 16” Macbook Pro has been equipped with powerful AMD Radeon graphic card variants. The base model comes with AMD Radeon Pro 5300M  with 4GB of GDDR6 RAM. Like I said before this laptop has been crafted with creators in mind – the likes of graphic artists, Game Developer, and  Visual Effects artists etc.

The Magic Everyone Wanted – Change the Keyboard!

We all know how the keyboards in the previous-generation MacBook were highly criticized by both the users and reviewers alike. Seems like Apple has heard what people have to say and finally this year’s New Macbook Pro 16” Keyboard is having the much loved Magic Keyboard – Apple says it’s even better!

The New 16” Mac book pro Magic Keyboard features what Apple call scissor mechanisms with a 1mm travel distance. Travel distance is what gives you that satisfying feeling of pressing the keys, that mechanical tactic feedback you receive while typing – Yes it’s because of this travel distance. 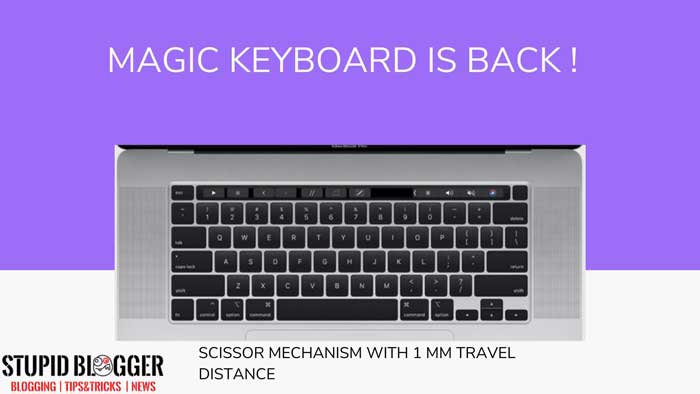 What does a travel distance of 1 mm mean? In recent years, This is one of the best keyboards that we have used. Full marks to the Apple team behind bringing the magic keyboard to life again. We hope Apple will pass it on to the 13” model as well.

Also Apple this time around has provided a dedicated escape key besides a touch bar. Well, this is good. Users are acclimatized to use the esp button without seeing and with the touch bar, there were times that you have to look down while looking for the esp button.

Well having discussed all the major changes, have we left anything out? Yes.

Battery: The battery life has been improved over the previous model as well. Now the laptop is fuelled by a 100-watt hour battery which is the largest permissible capacity allowed on flights by  Federal Aviation Administration. Apple claims 11 hours of wireless web browsing & video playback. It quite lives up to the expectation and was able to deliver 8 hrs plus of real-life continuous usage(Web browsing + Youtube + Photoshop & Netflix).

Apart from the battery the device comes equipped with 4 Thunderbolt 3 ports. This model also features the next generation of Apple Security chip – The Apple T2 security chip.

Macbooks have always been better in the case of audio speakers. The New Macbook Pro 16” comes with a six-speaker system and a very good mic system. The sound output from the speakers is the best in its class.

With the new 16” Macbook Pro Model, Apple has once again set a new benchmark in the industry. Trust us, Over the past few years after the Steve, We have never seen a product which has delivered in almost every front. Sure enough the New Macbook Pro 16” is an evolution of the previous generation of Macbooks but, we feel its more of a revolutionary evolution. This model has defined a new shift of thought process in Apple – Which long hasn’t been seen since Steve.

We can see they have taken some bold decisions, provided what exactly users were asking for. The same line of thought is also visible in their new iPhone SE. Let’s see where they take it from here. Planning to purchase this beauty? be sure to check our Macsales Promo Code to get some great offers.