NordVPN Vs TunnelBear | Which VPN Provide Better Security And Streaming?

NordVPN is one of the best VPN service providers available in the market. It is famous for its high-quality streaming and security features. Whereas TunnelBear is not that popular. Today, we are going to do head to head comparison between NordVPN vs TunnelBear to find is TunnelBear better than NordVPN or NordVPN easily overpowers the TunnelBear.

Background Of TunnelBear And NordVPN

On the flip side, TunnelBear is a Canada-based VPN service that provides and is operating for almost a decade. It was founded by Daniel Kaldor and Ryan Dochuk. However, in 2018, it was acquired by McAfee.

Features Offer By NordVPN Vs TunnelBear

There are tons of features that you may find with TunnelBear Vs NordVPN. Here, we have compared the various important aspects of them:

TunnelBear has a decent server range of more than 2600 servers evenly spread around the globe. The servers of TunnelBear VPN are placed in 41 countries including the UK, USA, Canada, Japan, etc.

Compared to TunnelBear, the server range of NordVPN is very big. NordVPN has around 5363 servers placed in 59 countries. The major countries where you can find its servers are the USA, UK, Canada, Brazil, etc.

So, in terms of servers, NordVPN definitely has an edge over the TunnelBear VPN.

Security and Privacy are the two most important aspects that you should look for before choosing any VPN. 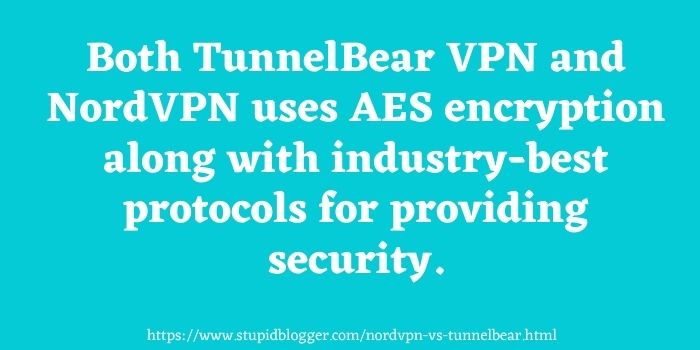 TunnelBear VPN uses the industry best AES-256-bit encryption for securing the user’s data. Besides, it also uses various protocols including OpenVPN/IKEv2, OpenVPN, IPSec/IKEv2, etc. that are considered as industry best protocols. It also operates with a no-log policy. The only aspect where TunnelBear lacks is that it is based in Canada that is a part of the 5 Eyes alliance.

Like TunnelBear VPN, NordVPN also uses military-grade AES encryption. The major protocols used by it are OpenVPN, IPSec/IKEv2, WireGuard, L2TP/IPSec, PPTP, etc. Besides, it also uses self-generated NordLynx protocols that are very fast and secure. For maintaining your privacy, NordVPN also uses a no-log policy. The best part is it is based in Panama and doesn’t come under the Jurisdiction of any major country.

So, between NordVPN vs TunnelBear VPN, NordVPN wins this battle.

To know which VPN is fast between NordVPN vs TunnelBear VPN, did some speed tests. In our tests, the US-based servers of NordVPN provide an average speed of 45.98 Mbps. Whereas the average speed of its European servers was around 37.88 Mbps.

In our tests, TunnelBear VPN also provided decent speed, although its average speed was less than the NordVPN. Its US servers provided an averages speed of 34.64 Mbps. Whereas the average speed of its European servers was 27.35 Mbps.

So, in our tests, NordVPN performed brilliantly and easily beat the TunnelBear VPN.

TunnelBear vs NordVPN, both are capable of bypassing internet censorship and unblocking various geo-restricted websites. Both of them are also able to unblock some major streaming websites like Netflix, Amazon Prime, BBC, etc. 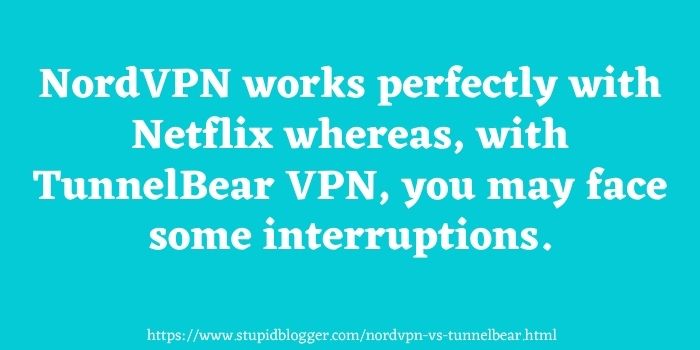 Although, TunnelBear is not considered that good for streaming. The bots of Netflix easily identify the IPs of TunnelBear servers and blocks them. Due to this, you may face connection interruptions while using it.

On the other hand, NordVPN is considered one of the best VPN for Netflix. It not only unblocks the various Netflix libraries but also provides great streaming speed.

Both NordVPN vs TunnelBear VPN supports a wide range of devices and provides various kinds of apps. The major apps provided by the TunnelBear VPN are:

NordVPN is also compatible with a large number of devices that are:

So, it is clearly visible that you can configure NordVPN on a wider range of devices as compared to the TunnelBear VPN.

Both TunnelBear vs NordVPN also support the Peer to Peer file-sharing or torrenting. NordVPN has some servers optimized for torrenting that provide amazing file sharing speed. With NordVPN you can do torrenting by using the servers of NordVPN present in around 48 countries including the US, UK, etc.

As stated earlier, TunnelBear VPN also supports torrenting. However, it restricts you only up to 7 countries for doing torrenting including its US, UK, servers.

So, in terms of torrenting, NordVPN definitely has an edge over the TunnelBear VPN.

The pricing of both TunnelBear and NordVPN is quite similar and their prices are:

These are the pricing of the TunnelBear VPN vs NordVPN. The monthly plans of TunnelBear are cheaper than the NordVPN. However, in the long run, their pricing is quite the same.

Who Has Better Support, TunnelBear Vs NordVPN?

For solving minor issues, both TunnelBear and NordVPN provide FAQ and knowledge base to their users. Besides this, both of them also allow you to contact their support team through emails. Additionally, NordVPN provides a 24 X 7 live chat support through which you can get instant resolutions.

Here, we conducted several tests and analyzed the various aspects of these two VPN brands. In almost every aspect NordVPN performed better than TunnelBear. However, by choosing the TunnelBear VPN you can save some bucks on the monthly subscription.

Wondershare Filmora Vs Camtasia 2022 - Which Is Better Video Editing Software?