The arena of VPN service providers embraces a large competition of big names within itself. With the sharp rise in the awareness and usability of VPNs, a lot of companies have extended their arm into the VPN business. Two of them are CyberGhost and ExpressVPN. In this article, we will make a comparison between CyberGhost vs ExpressVPN 2022. For this, we will have a look at the features offered by them along with their pricing.

But before moving towards the ExpressVPN vs CyberGhost comparison, let’s have an overview of these VPN service providers.

Overview To CyberGhost And ExpressVPN

Based in Romania, CyberGhost is a giant privacy and security provider that lends its VPN services to more than 15 million users. It has been offering its services since 2011. Recently, it was acquired by Kape Limited, a UK-based software brand.

On the flip side, ExpressVPN is a product of a British Virgin Islands-based company. It is a very famous name in the market and is used by a large number of people worldwide. It is also considered one of the best VPN providers currently available in the market.

CyberGhost provides three plans to its users, having different features but differentiated on the basis of the time period. The cost of CyberGhost VPN starts at $12.99 for a monthly subscription. Although, the cost of its yearly and 3-year $3.99/month and $2.55/month respectively. Its plans are also backed with a 45-day money-back guarantee.

So, the monthly pricing of both ExpressVPN vs CyberGhost VPNs is quite the same. However, in the long run, choosing CyberGhost can be cost-efficient for you.

In the further parts, we have compared the features that are offered by these VPN service providers.

Comparison Of Features Of CyberGhost Vs ExpressVPN

There are plenty of features that you may find with both ExpressVPN and CyberGhost. Due to this, both of them are also considered among the best VPN service providers. Here, we have compared these VPNs on the basis of features that a good VPN must have: 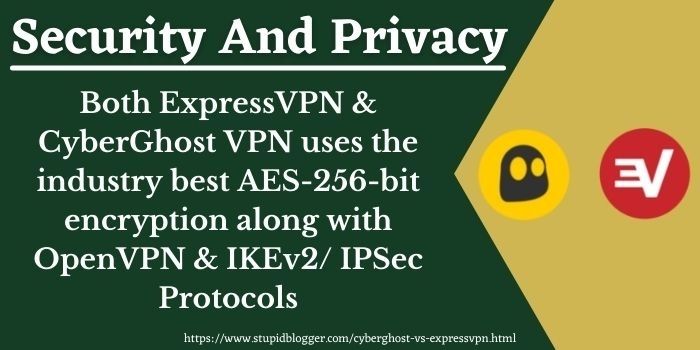 CyberGhost VPN extends its security with a strict no-logs policy and state-of-the-art encryption of 256-bit. Your data is protected with a 256 character long key making it the safest VPN. Apart from this, it also uses some of the best protocols like  OpenVPN, L2TP/ IPSec, IKEv2/ IPSec, and PPTP for safely routing your data. The only concern linked to the CyberGhost VPN is that it is based in the UK that is a part of 5 eyes. This can be a threat to your privacy in the future.

Even ExpressVPN itself cannot see or record the data that you browse on the internet due to its no-logging policy. It has no knowledge of what you do using its services. Like CyberGhost, it uses Advanced Encryption Standard (AES-256) in order to keep your data safe and secure. The major protocols used by it are Lightway, OpenVPN, WireGuard, L2TP/IPsec, etc. The best thing about ExpressVPN is that it is based in the British Virgin Islands and doesn’t come under the jurisdiction of any major country. 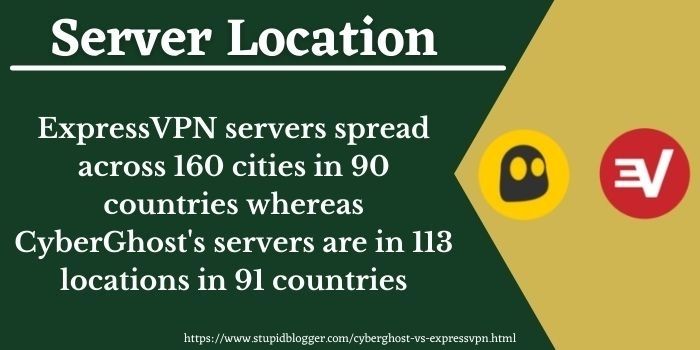 ExpressVPN is known to have the widest server range in comparison to all other VPNs. It even works in countries with conservative Governments like China, which have a strict censorship policy regarding their internet usage. It has its servers spread across 160 cities in more than 90 countries worldwide.

CyberGhost, on the other hand, consists of 7000 servers in about 113 locations in 91 countries. It is behind ExpressVPN in this case, and slowly trying to catch up. Besides this, its servers are not evenly spread and more than 60% of its servers are placed in American and European countries. This puts a heavy burden on servers placed in non-pacific regions.

Cyberghost is a VPN provider with high and reliable speeds, and it also provides you unlimited bandwidth with no cap on your data usage. The average connection speed that one can attain through CyberGhost VPN is 74 Mbps.

ExpressVPN on the other hand has an in-built speed tester, which constantly measures its speed in your location, and tries to give you the best outcome. With ExpressVPN you can achieve an average speed of 89 Mbps that is quite better than CyberGhost. It also provides its customers with unlimited data usage or bandwidth. 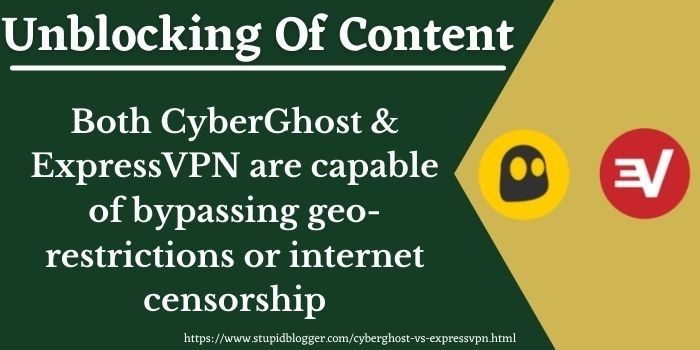 Both CyberGhost VPN Vs ExpressVPN are capable of bypassing geo-restrictions or internet censorship.

With the help of ExpressVPN, you can unblock sites such as BBC iPlayer, Netflix, Disney+, etc., which might not be available in your region. The best thing is that, due to its lightning-fast speed, you can stream these sites uninterrupted without the hurdle of buffering.

CyberGhost, on the other hand, helps in unblocking all the social media sites, though. It can also block many major streaming platforms like BBC iPlayer, Hulu, etc. But it doesn’t work perfectly with Netflix as bots of Netflix can easily identify and block the IP addresses of CyberGhost.

So, between ExpressVPN vs CyberGhost, it is suggested to go with ExpressVPN for streaming purposes. Both of these are also considered the best VPN to unblock Hotstar.

Irritating and unwanted Advertisements will be out of your way by using CyberGhost’s Ad-blocking and malicious content blocking tool. It blocks all the trackers and pop-use while browsing the web. This saves your time and provides you hassle-free browsing and streaming.

On the Other hand, when we talk about ExpressVPN, it lacks a built-in adblocker. Ads are also a means of having access to your data. Some companies even sell your information to advertisements to gain money. Therefore, the removal of ads in a VPN is very necessary, which ExpressVPN fails to do.

Both CyberGhost vs ExpressVPN provides almost the same kinds of support. For instant solutions, they provide 24×7 live chat support otherwise you can contact them through the mail. Besides this, both of them also come with informative blogs and FAQs that can help in solving minor issues.

So, these are the major features that one may find with ExpressVPN vs CyberGhost VPN. Apart from them, there are some additional features that we have discussed in the further part.

Other Exclusive Features Of CyberGhost And ExpressVPN

Limitation Of CyberGhost Vs ExpressVPN 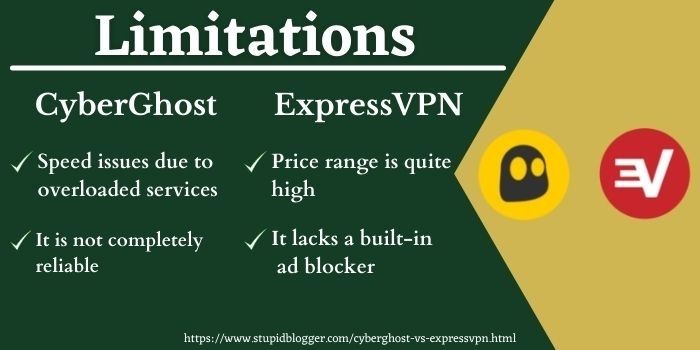 So far, we have compared the features and pricing of ExpressVPN vs CyberGhost. Now, we are going to highlight the areas where these VPN services lack.

Despite all the amazing features that CyberGhost provides, there are also some problems attached to it. A person might face speed issues sometimes due to overloaded servers. In terms of malware protection too, it is not completely reliable. Sometimes, there are connection logs, and in the case of HTTPS sites, the ad blocker is broken.

On the other hand, ExpressVPN can provide you with all the benefits that a VPN requires to engulf itself.  Though there are some areas where it needs improvement. The price range is quite high as compared to its competitors. Also, it lacks a built-in ad blocker that can make it more efficient.

We can clearly see that ExpressVPN is a value for money. It has been widely accepted and is used by a large number of people around the world. Though CyberGhost also fulfills all the important criteria that a good VPN should focus upon, ExpressVPN has a wider server location and CyberGhost is still trying to match its arena.