Autodesk Fusion 360 and Sketchup are widely known for online woodworking software and 3D modeling. Both the programs are easy to use that one can learn in a very short span of time.

However, Fusion 360 or Sketchup isn’t an easy choice as both programs are popular and offer advanced features. This Head to head comparison of Autodesk Fusion 360 vs Sketchup will help you decide and choose the best for you.

Introduction to Fusion 360 And Sketchup

Fusion 360 from Autodesk is a complete package for 2D & 3D design for manufacturing products. This cloud-based program allows users to work with their team and design the product together. With Fusion 360, you can work with printed circuit boards and designs.

On the other hand, Sketchup is a 3D designing tool that professionals use for mechanical engineering, landscape architecture, video game design, interior designing, etc. It offers high details in designs along with greater accuracy.

Head To Head Comparison Between Fusion 360 vs Sketchup

To make you decide confidentially between Autodesk Fusion 360 and Sketchup, we will compare each aspect of both products. Let’s have a look at the major features of both.

No software is good with fewer features. Software must contain advanced features for enhancing the quality of your work. So, is Fusion 360 and Sketchup can fullfill these requirements? Let’s find out. 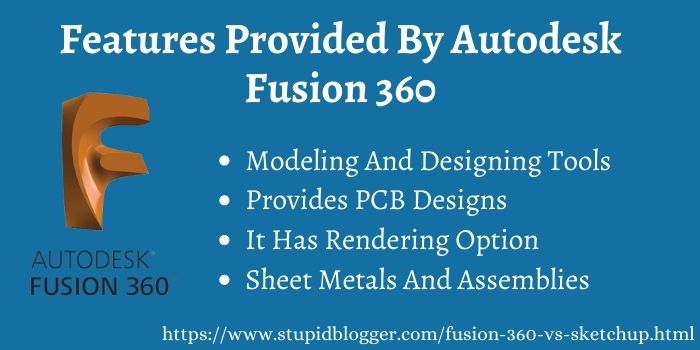 Fusion 360 offers a comprehensive range of modeling and designing tools. With the help of tools, you can create metal parts and surfaces. It supports Windows and Mac operating systems. Below are some of the major features of Fusion 360. 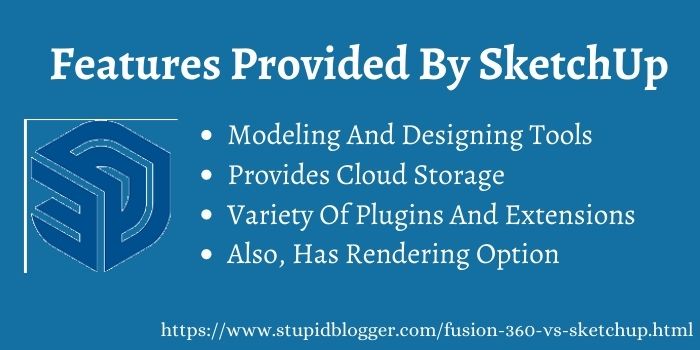 Sketchup is also used for the 3D modeling of different elements and components of a product. This professional yet smooth & easy-to-use tool has a user-friendly interface. Sketchup Supports only Windows operating systems. Below are some of its major features mentioned.

Which one is easy to learn and use Autodesk Fusion 360 Or Sketchup?

Talking about the learning curve of both Fusion 360 vs Sketchup, Both the products aren’t easy to operate initially.

Autodesk Fusion 360 is not a difficult application to use. However, You have to spend a specific amount of time learning its tools and features.

On the other hand, Sketchup also requires a specific time to learn this product. Its user-friendly interface offers all the features and tools at your fingertip that you can learn to use without spending much time.

Who Has A Better Modeling Feature SketechUp Or Autodesk Fusion 360?

Sketchup is the best choice for those who need modeling software for basic designs. It offers visualization as well as experimentation on some woodworking models. People who are inexperienced or beginners in the modeling field can take their bet on Sketchup.

Whereas, Fusion 360 offers an advanced and versatile approach while you create 3D model designs for 3D printing. Creating a 3D diagram from 2D shapes isn’t a tough job with Fusion 360, You get various tools on the layout to get this job done easily.

Fusion 360 comes with an STL exporter that helps to translate G-code and With this Fusion 360, can export STL files easily to 3D printers.

Sketchup doesn’t have any in-built ability to generate G-code. However, You can get download a free extension and plugin to help yourself in generating G-code and exporting the file.

Both the product have great customer support available. The experts are available around the clock to resolve any software-related issues and queries. Both have almost the same kind of customer support.

You can contact the customer support of both Sketchup and Fusion 360 via their social media handles, Email & Call to solve your issues.

The main aspect before buying a product, users compare the price with the alternatives. Here we are doing the same on your behalf.

Fusion 360 offers a free version for 3 years for student and non-commercial users. To get it for commercial purposes, you can buy one of the below-mentioned subscriptions for yourself.

On the other side, Sketchup offers a free version for commercial use but with some limitations and basic features. To get the advanced version and features, Below are the subscription packages mentioned that you can buy.

After going through the whole comparison of Fusion 360 v Sketchup, we hope now you are well aware of both. Above mentioned all the information will enable you to take a batter decision for yourself. However, we would recommend you first try the free version of both products. It will help you build your own point of view about Fusion 360 and Sketch.

Camtasia Vs Premiere Pro 2022 – Which is Better?